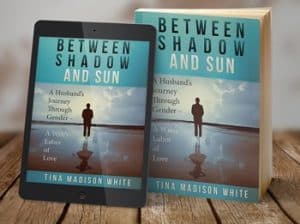 Between Shadow and Sun: A Discussion Guide for Readers

In Between Shadow and Sun, Tina and Mary grapple with some pretty big questions. How well do you think they do? Most of these involve deeply felt personal values. How do you feel? [Note: each of these questions can consume an entire discussion. Pick one or two and dig in.

When and How Do You Know? Tina suggests that she had her first inkling that something was different about her at the age of six . And yet she describes many moments of gender “normalcy” during her early years.

What Causes Gender Dysphoria? Tina describes her examination of family, religion, masculinity, and sexual orientation as possible causes for her gender dysphoria. She eventually eliminates each one.

Tina seems to accept the explanation that her brain went down a “different train track” in the womb. She likens our inability to prove this to our inability to see and conceive of germs prior to the invention of the microscope.

What Does It Mean to Think like a Woman? Tina admits to some discomfort with this notion, but says that it is the only way she can describe her reality. She experiences the world and herself in it as a woman.

Is the Gender Binary an Outmoded Idea? Tina describes her encounter at Columbia University with students who want to do away with the notion of gender altogether. They find it limiting.

Are Tina and Tom Two Different Persons?  Tina and her family struggle with a profound question: Was Tom dead and gone? Or was he simply transformed?

Is Being Transgender That Unique? While Tina focuses on her experience with gender, she continually tries to generalize her experience. She suggests, for example, that she transitioned for reasons common to anyone: the desire to be known for who she is, to feel loved, to be able to express herself authentically.

Do The Culturally Privileged Underestimate How Others Experience Its Absence? Tina suggests that she developed a fundamentally new appreciation of the meaning of cultural privilege when she lost it. It was more than a question of favoritism and advantage. Once she transitioned, the simplest activities took on a sinister air. She didn’t just feel disadvantaged, she felt unentitled, misjudged and unprotected.

What Does It Mean to Be An Ally? Tina mentions the importance of allies at work. She suggests that the little things they did to make her feel valued and welcome mattered as much to her as their advocacy for new policies. She says that these actions changed her behaviors and her feelings . Finally, she questions her own performance as an ally to other minorities.

When a Spouse Transitions, What Should Happen to the Marriage? In the foreword, Mary admits that she seriously considered divorce. At the end she asks, “was I right to stick around?” Tina says that she doesn’t consider it a mark of success that she and Mary remained together, but she wanted to do so.

Tina White is the Executive Director of the Blue Ridge Pride Center, in Asheville, North Carolina, and a member of the board of directors for the Human Rights Campaign. Tina spent 35 years consulting to and working for global corporations. Her specialty was large-scale business transformation: redesigning companies to pursue new strategies and improve performance. She has since shifted her focus to activism, writing and speaking. She speaks and writes on issues of diversity & inclusion, organization transformation, social justice, and personal identity. Tina is the author of Between Shadow and Sun. She describes her 50-year struggle with gender and her wife's efforts to embrace her revealed identity. She holds an MBA in Strategy, Marketing & Finance from the University of Chicago Booth School of Business and an AB in Economics from Princeton University. She and Mary live in Asheville, North Carolina.
PrevPrevious4 Things You Should Know About Transsexuality
NextBetween Shadow and Sun: A Visual TimelineNext
Scroll to Top