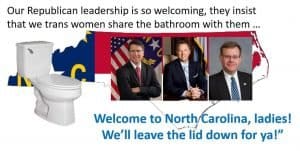 McCrory and I agree on one thing: the women and children of North Carolina – and those in the rest of the country – desperately need protection. We disagree, though, on how prioritizing this discriminatory bill solves anything.

Let’s back up. On an average day in America, almost 2,000 adult women are raped. Child Protective Services substantiates, or finds evidence for, a claim of child sexual abuse every eight minutes.

If you are a woman, you love a woman, or you’re the parent of a young child, surely these statistics make your blood boil. Sadly, 98 of 100 sexual perpetrators never see the inside of a prison.

Every law enforcement officer will tell you that men wearing dresses in bathrooms account for 0 of the 2,000 rapes per day. The same is true for transgender women in women’s bathrooms.

The problem – as Donald Trump, Dennis Hastert and Brock Turner have so vividly portrayed – is men misbehaving as men!

So what does McCrory do? He diverts our attention with a law that takes away rights and is essentially unenforceable when it comes to the “protections” he claims it ensures. After all, nobody is standing in front of a bathroom door. More than 300 organizations that work to prevent sexual assault and violence against women have spoken out against HB2-style laws because they do nothing to protect women.

Meanwhile, McCrory has wasted precious resources and time instead of focusing on law enforcement, education and jobs. And he’s put at risk transgender people — a group of people who are arguably one of the tiniest, least violent, most at-risk groups in our country. It is despicable. It is pure cowardice.

It is worse. It does nothing to solve the true sources of risk and violence to North Carolina women. In fact, by diverting scarce resources and raising false anxieties, it may make the women and children of North Carolina less safe.

But then again, this isn’t anything new for the North Carolina Legislature. NC Women United scored the General Assembly as “Very Bad” on 22 of 35 goals to remedy challenges faced by women in the state — three of those goals focused on reducing violence against women. On its 2015 national report card, the Institute for Women’s Policy Research gave North Carolina a D+ for women’s health and wellbeing. A look at other states that have proposed similar bathroom bills reveals a disturbing pattern: they, too, scrape the bottom of the barrel when it comes to protecting women’s health and wellbeing.

I have a unique vantage point on this issue. I am a transgender woman. But I am a woman. It is the only way I know to experience the world. Like all of the women I live and work with, I live every day with the reality that I may be raped or assaulted. I am also the mother of five and the grandmother of five. I worry daily about my children and grandchildren. It is an ugly, violent world out there. I understand other women’s fear. It is my own.

Here is the truth that Governor McCrory doesn’t want any of us focusing on: it is men misbehaving as men who put us at risk – at home and in our neighborhood, in cars and parking lots, at parties and on college campuses. And, now, in Raleigh.

We women deserve something better. Something a lot better.

Tina White is a member of the Human Rights Campaign Board of Directors. She is also the Director of Operations for Blue Ridge Pride and an author, speaker, and activist. She spent thirty years transforming Fortune 500 organizations before embarking on her most ambitious transformation project yet: herself. Her book, Between Shadow and Sun, describes her 50-year struggle to find her place in the world as a man, then her struggle to accept herself as a woman. She lives in Asheville with Mary, her wife of eighteen years.

Tina White is the Executive Director of the Blue Ridge Pride Center, in Asheville, North Carolina, and a member of the board of directors for the Human Rights Campaign. Tina spent 35 years consulting to and working for global corporations. Her specialty was large-scale business transformation: redesigning companies to pursue new strategies and improve performance. She has since shifted her focus to activism, writing and speaking. She speaks and writes on issues of diversity & inclusion, organization transformation, social justice, and personal identity. Tina is the author of Between Shadow and Sun. She describes her 50-year struggle with gender and her wife's efforts to embrace her revealed identity. She holds an MBA in Strategy, Marketing & Finance from the University of Chicago Booth School of Business and an AB in Economics from Princeton University. She and Mary live in Asheville, North Carolina.
PrevPreviousWhat Does It Mean to Be An Ally?
NextThere is cause for hope, America!Next
Scroll to Top