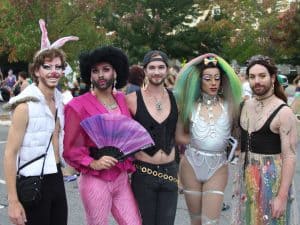 Resources for Getting to Know Us as People

Science, religion and social commentary offer useful lenses for understanding transsexuality. But they are no substitute for getting to know the people themselves. In fact, I think that they often get in the way. Fortunately, there are a lot of resources becoming available that vividly portray transgender lives. Here are a few that I have found particularly helpful.

I find these books to be some of the most useful and fascinating of the memoir genre. You gain many different perspectives in one book. Contributors share their greatest insights and most poignant moments. These collections cover all of the other memoir categories below.

These can be entertaining, insightful, and poignant. I have not included them above because they tend to celebrate lifestyles and careers that few of us expect to replicate. I include in this category, memoirs by Kate Bornstein, Caroline Cossey (Tula), Renee Richards, Kristin Beck, and Chaz Bono. All very cool people.

I have mixed feelings about television’s headlong rush to produce transgender reality shows. The exposure is good, but I worry that they invite caricature and stereotyping. We don’t live in the fishbowl that reality television portrays us in. Transgender people spend most of their days dealing with the same mundane issues as everyone else.

Three series are worth a look:  Becoming Us, I am Jazz, and I am Cait. Yes, there is some obvious scripting and posturing. But I am impressed by these series’ candor and by their even-handed editing. Caitlin Jenner, for example, allows herself to be captured making some very embarrassing statements that could easily have been edited out.

Becoming Us is probably the most realistic of the three in terms of its portrayal of day-to-day family life. We see a family struggle through some very deep angst. It is the most emotionally revealing of the three.

I am Jazz is the most uplifting. What an incredible family—so incredible that I sometimes found it hard to relate. It can be difficult to follow in the footsteps of supermom, Jeanette. Jazz, too, is amazing.

I am Cait is especially poignant because it contrasts Caitlin’s privilege and naiveté with the experience of trans women who are less fortunate and further along in their journey. I hope that they keep this element of the show. My two frustrations are Caitlin’s political views and the fact that most scenes portray trans people talking to other trans people. It would be more realistic to show trans people interacting with the rest of the world. That’s what we do most of the time.

Another television resource is the award-winning Amazon series, TransParent. Jill Soloway is a brilliant writer and director. She has assembled an incredible cast. Her portrayal of Mort’s transition to Maura is, in many respects, more realistic than are the reality shows. I identified with Maura in so many of the scenes.

My only complaint is that the series is set in what has got to be the most dysfunctional family on the small screen. There is sturm und drang everywhere. Maura, in fact, may be the most stable and well-adjusted member of her family.

This is not a criticism. It makes for fascinating television. But I worry that some viewers will come away with the notion that transgender people live lives filled with angst and drama and that our families are unstable. I look forward to seeing us portrayed more subtly in some lighter comedies.

There are many good DVDs. Two, in my opinion, have a particularly broad appeal. They are realistic and revealing but not too disturbing.

Reed, Kimberly. 2010. Prodigal Sons. Cinedigm. — A fascinating story with or without the transgender element. Ms. Reed starts to create a video focused on her return to her hometown. But she wisely allows the plot to change direction as something equally fascinating crops up. While it isn’t especially informative about transgender issues, I like that it presents Ms. Reed as an ordinary person engaged with her family.

Arnold, Chris. 2013. Trans—The Movie. RoseWorks and SexSmart Films. — Captures the diversity of the transgender community and their struggles. Nice mix of personal stories and community events.

Transgender People on the Internet

There are many fascinating videos on the Internet. Try searching for a talk show you respect (e.g., Frontline, Dr. Oz, Oprah Winfrey), together with terms like transgender, transsexual, transgender families. Alternatively, enter topics of interest on YouTube. Many transgender men and women maintain video blogs there. It is difficult to catalog these because they tend to come and go as each person transitions.

Tina White is the Executive Director of the Blue Ridge Pride Center, in Asheville, North Carolina, and a member of the board of directors for the Human Rights Campaign. Tina spent 35 years consulting to and working for global corporations. Her specialty was large-scale business transformation: redesigning companies to pursue new strategies and improve performance. She has since shifted her focus to activism, writing and speaking. She speaks and writes on issues of diversity & inclusion, organization transformation, social justice, and personal identity. Tina is the author of Between Shadow and Sun. She describes her 50-year struggle with gender and her wife's efforts to embrace her revealed identity. She holds an MBA in Strategy, Marketing & Finance from the University of Chicago Booth School of Business and an AB in Economics from Princeton University. She and Mary live in Asheville, North Carolina.
PrevPreviousWhy I Wrote Between Shadow and Sun
NextResources for Those Seeking Information and Support Regarding GenderNext
Scroll to Top