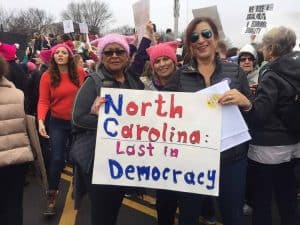 There is cause for hope, America!

The National Women's March - the first march I have attended - left me very hopeful for our future. I was especially impressed by the younger generation.

I have just returned from a wonderfully exhausting day at the Mall in Washington DC. There, I marched with two other local Asheville activists and many friends from the Human Rights Campaign.
How amazing to be surrounded by 500,000 of my closest friends! All day long, our chants chorused across the Mall – from the Capitol, to the Washington Monument, to the White House. There were more pink-knit caps in the crowd than there are sheep in New Zealand. Really. It was HUGE!

I found several reasons to be especially hopeful for America after today:

First, there were all the young women who showed up on behalf of their generation. They were there in the tens of thousands. I marveled at their self-assurance. They clearly felt entitled to their power. They spoke, expecting to be heard. There was no request; no apology. It wasn’t something they felt they had to earn or ask for. To be honest, I felt a little jealous.
They were artful, too. One of their posters asked Donald, “If I incorporate my uterus, will you deregulate it?”

The young men were equally inspiring. One of the women in my group teared up when, all about us, thousands of young men and women joined voices in an impromptu duet of the sexes:
MEN: Your body! Your choice! Your body! Your choice!
WOMEN: Our body! Our choice! Our body! Our choice!
Over and over their voices rang out in call-and-response. To hear both sexes of our younger generation join voices with such spontaneity was beyond words. It was a love song for the ages.
Several of the men’s posters proclaimed their new masculinity: “Real men ask consent.”

Finally, there was an element that happened so naturally, it almost escaped my notice. The majority in the crowd were white. And yet “black lives matter” was everywhere. That I noticed. What nearly escaped me was the fact that it didn’t feel like an add-on issue. It didn’t come across to me as a black issue. Everyone there owned it. It was as though they considered it as natural and as necessary as breathing oxygen. Why would you treat any human being differently?
Black and white, everyone cheered one another on. For a day, I almost forgot about race as a dividing point. We were brothers and sisters. We had each other’s backs. We talked about race as an issue we owned collectively.
One middle-aged man bore my favorite poster in this category: “It’s not alt-right. It’s white supremacy.”

I had the same experience with LGBTQ equality. For once, I didn’t feel like a minority, trying to pacify a mass of discomforted strangers. I was among family, a VERY, big and inclusive family. (Dare I say, “HUGE?”)
They weren’t protecting me out of a vague sense of liberal obligation. They were protecting one of their own. They were fighting for humans. I was just part of the diverse world they had come to value.
I suspect that, in recent years, many of those assembled had come to realize that many of those dearest to them at home are different, too; and no less worthy of their love because of it.
Unfortunately, I didn’t see the poster I wanted to see in this category: “WE are the people of family values.”
We don’t toss aside members of our family for being different. We love our family for who they are and help them to become all that they can be. WE don’t treat our own like garbage. WE hold family sacred

It was a truly spectacular day. Maybe we aren’t without hope after all.

To my generation, I say: these children and young adults are worth every ounce of fight we have left in us. From what I saw today, they are precious beyond words. I continue to draw hope and inspiration from them in ways that I never imagined. If you aren’t getting to know them, you are missing out.

To my town of Asheville, I say: this isn’t a fight between faceless metropolises and rural homesteads. This is our fight.
Throughout the day, I carried a sign, “North Carolina: Last in Democracy”. The sign brought fellow Tar Heels flocking to our trio to snap a picture. Many of them hailed from small-town North Carolina – from the Outer Banks, Murphy, Goldsboro – and Buncombe County. “We are so embarrassed”, one elderly gentleman blushed, “but your sign speaks the truth. We have to fix this.”
Our future lies as much with the Shires of America as with its cities and farms. Our townspeople are not daunted by Smaug’s golden breastplate. They know that Mordor can be felled by the least of us.
Let’s show them how it’s done, Asheville! I look forward to slaying dragons and toppling warlords with all of you.

Much love to you all,
Tina

1 thought on “There is cause for hope, America!”

Tina White is the Executive Director of the Blue Ridge Pride Center, in Asheville, North Carolina, and a member of the board of directors for the Human Rights Campaign. Tina spent 35 years consulting to and working for global corporations. Her specialty was large-scale business transformation: redesigning companies to pursue new strategies and improve performance. She has since shifted her focus to activism, writing and speaking. She speaks and writes on issues of diversity & inclusion, organization transformation, social justice, and personal identity. Tina is the author of Between Shadow and Sun. She describes her 50-year struggle with gender and her wife's efforts to embrace her revealed identity. She holds an MBA in Strategy, Marketing & Finance from the University of Chicago Booth School of Business and an AB in Economics from Princeton University. She and Mary live in Asheville, North Carolina.
PrevPreviousMcCrory’s HB2: Another Republican Exploitation of Women
NextA Dictionary of GenderNext
Scroll to Top