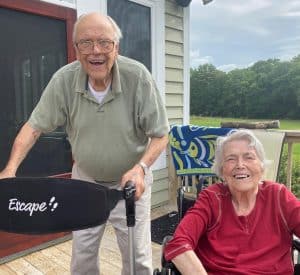 My parents have spent a lifetime fighting for racial justice. Our efforts to ensure their safety during COVID brought to light how much further we have to go.

These have been tough months for my family – at least where my parents are concerned. The start of the year found Mom and Dad unexpectedly sharing a hospital room. Dad was battling septicemia. Mom had fractured her hip while entering the hospital to visit him. In addition to their physical ailments, both were beginning to lose a little of their mental vigor.

Mom and Dad have shared a home in Washington DC for fifty years. They have clung to it as a drowning swimmer might clutch at a life preserver. Unfortunately, their recent decline in health dictated against a return to their home, possibly for good. We moved them into a long-term care facility, “just until you recover”.

Then COVID hit. The facility entered lockdown. Mom and Dad were stuck there, confused, alone and terrified. Owing to their different needs, they were confined to separate rooms at opposite ends of the building. We could not get in. They could not get out. We arranged access for a private nurse they knew and loved. Then we crossed our fingers.

In February, we started to read about COVID outbreaks in nursing homes. One day, the call came. COVID had arrived at our parent’s care facility. We sprang into action.

In Washington DC, my youngest brother, Graham, negotiated our parents’ medical release. He gathered their medicines, medical records, and personal essentials. In South Carolina, my other brother, David, interviewed physicians, physical therapists, and home care specialists. Could he create a web of care on his isolated pig farm during lockdown?

My wife, Mary, and I served as couriers. We drove our car from Asheville to the front gate of the long-term care facility. While we waited for the building to disgorge my mother through the front door, we walked to the back of the facility to wave a hello and a kiss to my father, confined in his second-floor apartment.

I will skip the details of all that followed. Mary and I ferried my mother to Florence. Two days later, Graham arrived with my father. David and his family spent the ensuing weeks working out the kinks in my parents’ care routine and helping them to settle in.

I am glad that my father (Reverend Ed) cannot fully appreciate all that is happening in the world right now. It would break his heart.

A little over fifty years ago, Reverend Ed left New York to become a Freedom Rider. He was assigned to North Carolina. He returned to New York to pastor a black and Hispanic church on Manhattan’s West Side. Later, he moved our family to Chicago, where he devoted himself to working with inner city youth. Finally, Reverend Ed moved our family to Washington DC, where he presided over the local integration of the northern and southern branches of the Presbyterian Church.

Dad and Mom have devoted much of their lives to combating racism, poverty, gun violence, and to serving people who are incarcerated. Some would dismiss my parents as “liberals,” by which they mean misguided souls who are less than fully developed humans. I would describe my mother and father as among the most fully developed humans I have met. They are capable of discerning and loving the humanity in anyone.

I am certain that Dad is grateful for the support he has received from his children. But, could he appreciate it, he would despair at all the privilege. He would contrast his situation with that of the 65,000 prison inmates in the United States known to be infected with COVID. Their deaths have risen 73 percent since mid-May. Unlike him, they cannot so easily be sprung from their confines.

It isn’t just that they are locked away behind bars.  Their families haven’t the resources we had. We had money. We had time. We had cars, houses, and access to medical advisors.  Few families of the incarcerated have such luxuries.  In fact, many such families are eking out a living taking care of people like my mother and father. Most of the healthcare workers who now come and go from my brother’s home are black. How, my father would ask, are these lives any less precious than his?

I can hear the conservative rejoinder: That’s easy, they did it to themselves. But did they?

Justice is not a disembodied ideal.  It is a social institution.  Police, lawyers, courts, prisons, bail bondsmen – these are all fallible people organized through a complex network of rules, biases, incentives, algorithms, and unintended consequences. The same applies to our economic institutions, to our wage laws, tax systems, monopoly powers, lending practices, and transit systems. Conservatives would have you believe that these institutions are inherently just.  Weren’t they designed by good and God-fearing people?

We don’t do that. We turn a blind eye. To acknowledge and confront the creeping injustice that perverts our social and economic institutions threatens our identity as a good and just people. “We are good. How could our cherished institutions be bad?”

It is a human instinct and therefore forgivable. But it is wrong.

My father would argue that it is vital that we acknowledge both that black lives matter and that white privilege exists. Black Lives Matter addresses the deeply rooted residue of prejudice that still finds toxic expression in our society. Acknowledging White Privilege invites us to an examination of the many hidden forms of injustice that have crept into our institutions.

Some would have us look back in shame. And they are right to do so. So long as our past remains in the present, we must feel shame. But my father always worried about shame’s toxic effects. He would challenge us to channel our energy to moving forward together with love and conviction.

A few years ago, the Human Rights Campaign graced me with an invitation to speak at an annual gathering of key supporters. Would I share the story of my struggle to live my gendered identity? After I delivered my speech, someone handed a microphone to my father, sitting in the audience. “How do you feel about your daughter, Reverend?”

Dad allowed that he was very proud of me. “But, you know,” he said, “LGBT people aren’t the only ones who are oppressed. You have to fight for everyone .. blacks, Hispanics, Moslems, the poor. You’re not the only people in the world who are persecuted. You have to fight for everyone or you’re not fighting for justice. You’re just fighting for yourselves.”

The response was immediate and electric. I’ll be damned if the old man hadn’t stolen my audience! Maybe it’s time I listened to him.